My mother was born of a woman who did not keep her.

My mother was born of a woman who did not keep her. One of many siblings, my mother was supposedly the only child her mother decided she could not keep. She was adopted into a very well off, heavily educated Black and Native family, a family that never officially revealed to her that she was adopted.

At 18, my mother married her high school sweetheart, and some years later, after a tragic miscarriage, they had me.

I may have been one of the greatest gifts my mother had given my Granny. Where Granny may have been cold or distant with my mother, she was warm and sharing with me. Granny volunteered to talk to me about things that she’d never shared with my mother. In her eyes, I could do no wrong. In my youth, I’d attributed the tensions between Mom and Granny to jealousy. Mom simply craved the connection that Granny and I had.

As I grew older, however, tensions between my mother and myself began to build. I noticed that the image I had of my mother; of a perfect, professional woman with great boobs, was replaced by images of a scared, pressured woman, grasping at straws.

My White Step Parents Reacted to My Natural Hair Transformation

The first evidence I have of discord between my mother and myself is recorded in a Winnie the Pooh journal I had in elementary school. I’d written about how my mother had a tendency to hide her stress when outside of the home, only to unload it upon seeing me. I don’t remember what prompted this entry but I remember clearly realizing that my mother had complete cool and control over everything but herself.

I noticed that the image I had of my mother; of a perfect, professional woman with great boobs, was replaced by images of a scared, pressured woman, grasping at straws.

Things got physical for the first time when I was 13. My parents and I had just returned home from my high school orientation. There, we were introduced to our teachers and future freshman classmates for the first time. I saw it as a chance to really mark what my identity would be for the next four years amongst the people I’d be spending that time with. Instead, my mother felt I was being too loud, and calling too much attention towards myself. She had me sit next to her for the duration of the assembly. I was officially “that girl”. I don’t remember the specific reason she hit my face when we got home, but I do remember this being the first time my mother and I got into a physical altercation.

In spite of our inability to get along, my mother was devastated when she realized I wanted to go to college out of state, and regularly made me feel guilt for abandoning her to live a sad life with her loving husband, crying into her Merlot over the sound of the jets in her hot tub. She’d convinced me to come back home for about a year before I left and moved in with the first man who would have me.

I saw it as a chance to really mark what my identity would be for the next four years amongst the people I’d be spending that time with.

I’d like to say everything is great, but it’s been less than 30 days since my mother and I have had to wrestle our points across. Even so, I know that, in spite of it all, my mother and I would die for eachother. But how can this be true? Why are so many mothers and daughters stuck in love hate relationships?

If I’m honest with myself, I see the buds of a similar relationship peeking through in regards to my daughter and I. I feel strong emotions towards my daughter that I don’t feel towards my son. In trying to identify my own feelings, I’ve come to the conclusion that a large part of my feelings towards her are fueled by raw fear.

I know what it is to be a woman; to be a female person. I’m familiar with the male gaze, and I know too well the feelings that come along with realizing you’re a sexual object. I know the dangers of being innocent in the presence of the wrong man. I know how delicate the deflowering of naivete is; exponentially more powerful than deflowering of the body. I’m a grown woman, who has lived it. So when I see my young daughter being free; when I see a young woman unashamed of her nakedness, when I see a chubby girl who adores her own body, when I look into my daughter’s eyes and I’m met with the confidence that she is safe and her body is hers, I feel a rage. I feel a rage for her. I feel a rage for myself. I feel hatred for the fact that she will have to be objectified. I feel overwhelming hope that she will beat the odds, and never have to suffer any type of sexual abuse. But I’ve been where she is. I am a woman, and I know how this goes.

Maybe that anger, that anger at the way things are, maybe as mothers we are blind to the fact that we are misdirecting our anger. Maybe I’m not angry at the fact that my daughter enjoys dancing naked, I’m angry at the fact that that will be taken from her. I hate that the bodies of my grandmothers, and my mother, my daughter and my nieces, while so full of intelligence and creativity, life and the gift of creating life, are vulnerable to such ugliness. But instead of celebrating her love of herself, I’m projecting my fears onto her.

If I’m honest with myself, I see the buds of a similar relationship peeking through in regards to my daughter and I. I feel strong emotions towards my daughter that I don’t feel towards my son.

Mother daughter jealously is stereotypically a huge problem in the POC community. I can’t speak with personal experience as to how it is in other communities, but there is a noticeable trend in the Black community of tension in mother daughter relationships. Of course some of this may simply be mothers unsuccessfully living vicariously through what they see as younger versions of themselves, but history teaches us Black women have had a very unique experience in this country. Black mothers could have their daughters taken and sold at any moment. Black mothers would nurse White babies only to have those children grow up and dehumanize them. Black women were Jezebels, and couldn’t legally be raped. Black women had to beat their kids and keep them in line, because the punishment they’d face outside of their Black homes in the White world could potentially be so much worse. They had to strike enough fear into their daughters to keep them safe.  Black women had to cover their hair in some places in the South so as not to attract too much attention to themselves. Black women in this country have been conditioned to be constantly aware of their womanhood, and have often had it used, defined, and manipulated in a way that has clearly caused lasting harm.

Mothers look at rape in the Black community the way people look at a car crunched around a tree after an impact. There’s sadness, but there’s also blame, and anger: why didn’t you just avoid the tree? Did you break quickly enough? Why were you going so fast? You must be a bad driver. Why did you allow this awful thing to happen? The anger once again misplaced, swerving around the patriarchy and things that have created these conditions, and focusing solely on the victim. The victim that should have known better, maybe the way we feel we, ourselves, should have known better. Or perhaps the way our mothers should have known better and caught things in our own lives that may have been missed, in spite of the vigilant, worrying mother’s gaze. Perhaps we’re angry at a system we feel we can’t change, and are instead channeling that frustration onto young women who want the same things we do: to be able to be free. To dance naked sometimes without worry. To loving our chubby tummies without making excuses.

At the end of the day, I make a conscious effort to break the generational cycle of mother daughter awkwardness in my family. I try to spend more time teaching my son about how to treat women than I do teaching a little girl how to fear. I go out of my way to make my husband look like a super husband, in spite of our challenges, so that she has confidence in her first love, the first man in her life, and has some kind of a template for how a man should treat her. I make sure she has plenty to be proud of. I introduce her to every sport, instrument, and hobby she shows interest in, so she’ll never run out of things to serve as a platform for her awesomeness. I fill her media with female role models. And if none of that works, we’ll put the little chick in Tae Kwon Do. If you can’t beat the oppressive patriarchal system, at least be strong enough to knock it the hell out. 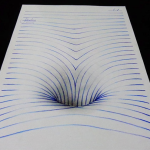 Deborah Alice is a freelance writer based outside of Baltimore, Maryland. Her writing reflects her personal interest in civil rights and the human condition. Filtering personal experiences and observations through a bi-sexual, clinically depressed, atheist, progressive, pro-Black lens brings a new perspective to everyday topics, lending an honest and raw voice through text. She is the mother of two, on her first marriage, with a 9 year old Pit Bull Terrier named Jessie who prefers Deborah's parent's house.

Why January’s Super Blue Blood Moon is a True Spectacle

The Culture,Craft and Codeine (Part 2)

Who’s On My Playlist: Beyonce